We explored the latest innovation in VR technology this morning. Thank you to Mr Ruparel, governor and parent at Finton House, for a fascinating assembly about 360º immersive photography. It was captivating to listen to his talk about bringing virtual reality to the remote refugee camp Kakuma in Kenya. In a mission to enable children in the camp to experience a ‘school trip’ to the National Gallery, the 360º camera was used to show engaging gallery workshops to the children. The children described the experience with only three letters ‘WOW’, which pretty much describes how they must have felt when experiencing virtual reality first hand. Referring to this term’s Finton Goal, Mr Ruparel went on to highlight that technology makes communication happen instantly all around the world.

“Poetry week was jazzed up by our visiting poet Joseph Coelho! He started his assembly off by talking about a useful method that he uses called MORERAPS, which stands for M-metaphor, O-onomatopoeia, R-rythm, E-emotion, R-repetition, A-alliteration, P-personification, S-simile. Then he read from some of his books and poems. Apparently he even has a poem that’s an hour-long! He explained that he writes novels, poems, non-fiction, fiction and picture books.

Later on the School Reporters, well two of us, had the opportunity to interview him. When asked what advice he has for future writers, he replied that he recommends always carrying a notebook for ideas, getting into the habit of observing what is around us and asking lots of questions. Joseph told us that science and non-fiction museums had a big influence on his writing, but he also got inspired by lots of other poets and writers, like Michael Rosen. We asked what he would do if he felt uninspired and how he gets his creativity flowing. He recommended to do something completely different and to take your mind off writing with for example gardening, watching a documentary or cooking. Lastly, he explained that the whole process of writing a book can take around 2 years.

We enjoyed the assembly and especially loved interviewing him.”
By School Reporters Sicily and Rosie (Year 6)

An annual event not to be missed, the Sustainability Fair showcases creativity and environmental awareness with Year 4’s sustainable inventions in the spotlight. After learning about sustainability in class, Year 4 children put their theoretical knowledge to the test. From the Desalination Sensation which turns salt water into fresh drinking water to a litter picking robot, the sheer variety of imaginative ideas was impressive. All Upper School children took their turn to visit the Fair on Thursday morning to learn more about the children’s inventions. Fantastic learning opportunity for all!

Travel with us on a new adventure…

On Wednesday, Year 6 had their final debut showing off the finest Finton House acting talent. The audience was in tears as the children told the hilarious tales of the infamous pirate, Captain Swaggersword.

Every year Mr Paul surprises us with his talent of writing the most humorous and funny scripts for the Year 6 play. This year was certainly no exception. The jokes were on point and the lines perfectly rehearsed. The children slipped into their new roles as if they were born to be pirates, sailors, street sellers and navy admirals. A brilliant performance and fantastic memory to treasure for years to come!

Virtual Reality transported the children to one of the oldest surviving cultures in the world. With a full 360-degree view, the children took part in a dance and didgeridoo performance and observed the cultures and traditions of the Aborigines in the North Queensland rainforest. The workshop deepened their learning through incorporating historical facts in 3D experiences. Year 3 was amazed by this immersive learning experience!

Children in Reception stepped back in time to experience the daily life in Victorian Britain this week. As the ‘new servants’ at Sudbury Manor the children had to complete household chores to the housekeeper’s satisfaction. After a day of hard work, they got to play with some typical Victorian toys, which they absolutely loved. What a memorable way to teach children about historical characters, periods and events!

We are proud to be part of an inspiring contemporary art project which will be unveiled at Tate Britain in 2019. By taking part, Year 3 pupils will see themselves in a major artwork at the heart of the nation’s collection. The workshop in January, led by the Tate photographer, explored themes central to the work like inclusion, difference, identity and aspiration.

This vast new work of art will be one of the most ambitious visual portraits of citizenship ever undertaken. It will capture tens of thousands of Year 3 schoolchildren in a milestone year in their development. 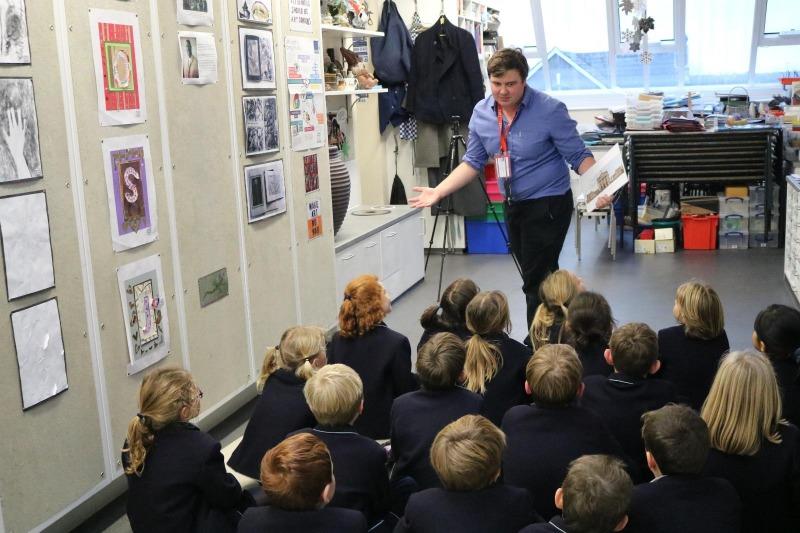 “The expression on children’s faces is all it takes to make Christmas a magical time of the year!” Reception, Year 1 and Year 2 were taken by surprise on Wednesday morning as Santa appeared in their classroom after a very long ride from the North Pole. Santa told the children about his busy schedule this Christmas and was delighted when the children offered to leave out some mince pies for him and carrots for the reindeer.

In the meantime, Upper School had a fantastic time in the playground. Thanks must go to Miss Lucy for organising the event and to our amazing parent elves for not only decorating the playground beautifully but also setting up fun games for the children. They loved it!

But the Christmas activities did not stop there, next the Christmas lunch and panto were on the busy Wednesday schedule. Barnaby K., School Reporter writes: “On Wednesday 12th November, the staff performed an excellent rendition of ‘Pinocchetta’. Mr Paul, who wrote it, also performed as an evil puppet-master. Also the lunch staff put together an amazing Christmas Lunch, with pigs-in-blankets, turkey, carrots, gravy, parsnips and everyone’s favourite: sprouts!”

Year 2 and 3 class assemblies are in full swing! Last week we had the pleasure of meeting Florence Nightingale and Julius Caesar. We also saw the book ‘James and the Giant Peach’ spring to life on stage.

Our Year 6 School Reporter Annika writes: “Today we watched a brilliant assembly by our Year 3 Romans and Celts. It was a wonderful play with lots of humour and acting. The assembly concluded with a song all about how Britain was governed by the Roman Empire. We all learnt a lot about the Romans and loved the assembly!”

This week we enjoyed assemblies about the world’s weather and the different countries in the UK.

Year 6 produced some highly amusing and dramatic moments in their performance of Camelot.

The children have been working extremely hard on their rehearsals, and all their efforts have been rewarded. Everyone agreed that their singing, acting and dancing was on par with Broadway! The cast left their audience in awe at this tremendous achievement. Well done to Year 6 and their fabulous teachers for an amazing show.