Year 5 pupil Sophia is a British Lung Foundation young ambassador. The organisation, which has recently joined Asthma UK to form Asthma + Lung UK, invited Sophia to parliament to celebrate the launch of their new #FightingForBreath campaign. Sophia was accompanied by fellow Y5 pupil Isla, alongside other pupils from nearby Hornsby House, and they were joined by MPs and senior staff from Asthma + Lung UK. 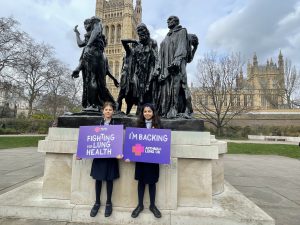 Sophia said, “It is so important that we continue fighting for clean air, especially as children growing up in a polluted city like London”.

Sophia’s mother, Marium, is an NHS worker. She said, “Over the past few years, Sophia has used her initiative and taken on the responsibility to raise awareness for lung health in the local and school community. She has also been involved in some much needed fundraising for Asthma + Lung UK to be able to provide essential support and resources for those with lung conditions and to invest in research. Air pollution and climate change affects everyone. We can all be Clean Air Champions!”

We use cookies on our website to give you the most relevant experience by remembering your preferences and repeat visits. By clicking “Accept All”, you consent to the use of ALL the cookies. However, you may visit "Cookie Settings" to provide a controlled consent.
Cookie SettingsReject AllAccept All
Manage consent